I’ve written extensively about my MP ancestor, Michael Joyce before but I had never identified his parents’ marriage. Richard Joyce and Bridget Tubbs‘ oldest recorded child was born in 1847, so there was a likely marriage date of 1-2 years before that but nothing showed up in the various Limerick city church registers. There was some suggestion from a distant cousin that Bridget might have come from Bruff and it would be usual to marry in the bride’s parish, but those records also yielded nothing.

Like many genealogists, I use Ancestry. They have a first-rate hint system which searches your uploaded family tree, then suggests records and user-inputted material that might match your people. In its early days, it was hit and miss but as long as you carefully assess what it’s offering and don’t blindly add everything to your tree (particularly from unsourced public trees), it can be a good way of helping you think outside the box. 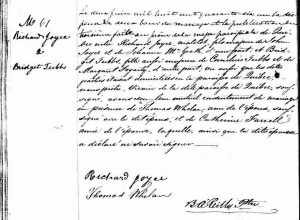 So it was a great surprise when it suggested a hint for Richard and Bridget’s marriage on Thursday night, when I was up doing genealogy late into the night after a disappointing evening on another front.

The marriage it suggested was in Quebec in 1846. Luckily for me, I still remember my school French as the transcription only gives the bride and groom’s names.

I already knew that Richard’s parents were John Joyce and Joan/Joanna McGrath, and given that there were 2 sons called Cornelius and a daughter called Margaret, I felt this record was spot on.

But why they got married in Quebec remains a mystery for now. Richard Joyce got a river pilot’s licence in 1847 so he, like his sons Michael and James, had a career on the sea – all pilots had to spend 5 years at sea first. Why Bridget was also in Canada is a puzzle. This is of course the Famine decade and there was much early emigration to Canada. However, Bridget & Richard came back to Ireland almost immediately because their first son was born in Limerick, approximately 9 months later.

It’s not every day you get 2 new great-great-great-great (4!) grandparents but I’d like to welcome Cornelius Tubbs and Margaret Fogarty to the family memory once again. Having their names brings that generation to a total of 9/64 – it’s a particularly tough generation to work on, as Catholic records are really only getting going in this period (1810-1830). By comparison, the next generation of 3 x grandparents is much easier and I know names and details for 29/32 of them. These earlier people would have been born around the turn of the 19th century. Going back to the Bruff link, I can see that they had most of their children there but Bridget, my direct ancestor, eluded me. Years ago I had seen a birth in Dublin of someone with that name but I had discounted it because nothing suggested to me that she ever left Limerick. But I saw something in the records in Bruff that made me think again.

Cornelius Tubbs had an illegitimate son called Edmond with a woman, Mary Hartigan in 1823. That sounds like a pretty good reason to skip town, right?

Take a look at this marriage from October 1824 in St Andrew’s church in Dublin. Connor Tubbs & Margaret Fogarty. Con is the usual short form of Cornelius* and Connor is considered a variant.

And further more, here’s the record I had found years ago and discounted.

It seems a pretty good working theory that Cornelius, or Con, hightailed it out of Bruff after getting a local woman pregnant, came to Dublin, where he met and married Margaret Fogarty a mere 13 months later. They had Bridget here, a respectable 10 months after, and they then returned to Bruff, where they went on to have 7 more children. However, it’s also possible that Margaret ran away with him because there’s plenty of Fogartys in Bruff and some feature as godparents to their children. Unfortunately, there’s a gap in the parish records right around when I’d expect Cornelius & Margaret to be born, so I probably won’t be able to progress their line backwards using traditional methods.

This article contains some affiliate links, which means I get a tiny commission if you click the link. It changes nothing about your interaction but helps support my research & blog.