The story of the sinking of the RMS Leinster on 10th October 1918 is one that always loomed large in my family because my great-great grandfather, Michael Joyce MP, was aboard when it happened. He survived the disaster but more than 550 people lost their lives. The figures are not exact because travel between Ireland and Britain was unregulated.

In this centenary week, several commemorative events and talks are taking place. Although it is Ireland’s worst maritime disaster, public memory often remembers the Titanic and the Lusitania over the Leinster. While I have no wish to reduce the memory of these other tragedies, far more Irish people died on the Leinster. Its memory was perhaps forgotten with the whirlwind of the coming War of Independence and the Civil War. In the early years of the Free State, events that happened under British rule were often brushed aside in a wave of new nationalism. Similarly, many men who fought in World War I did not speak of their experiences.

For a very moving eye witness account of the sinking, see the Irish Times Saturday 6/10/2018 for Hilda Dudgeon’s experience, recounted in a letter to her husband, then serving at the front in France. Her story mentions Michael Joyce in passing.

Michael’s own account was given in the Freeman’s Journal on 11th October 1918. Click on the thumbnail below to open in a larger page. Some quotes from the article:

“I knew at once that the ship had been struck by a torpedo. I put on a lifebelt and went to deck.”

“After a while, we found that there were people in the water, some of them quite close to us, but we found it impossible to get them aboard. Some were within an ear’s distance of us but they were washed out of our reach. It was heartbreaking to be in such a helpless position, but absolutely helpless we were in the circumstances. Eventually, we succeeded in getting three people aboard…”

“I cannot speak with anything like certainty, the rescue ships arrived in about an hour and half or two hours….I cannot speak in terms too highly appreciative of the officers and men who did all that was possible to make us comfortable.” 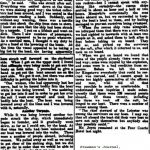 Working with the team at the National Maritime Museum in Dun Laoghaire, I’ve helped write some biographies of people who were aboard the RMS Leinster.  This page from the 1918 death registers of Dublin North shows the following people who drowned in the disaster. Their families were perhaps lucky to recover their bodies; many were never found. RIP.

A descendant of a woman who should have travelled aboard the Leinster (but did not) told me of his grandfather searching the bodies on the pier in Dun Laoghaire before he knew his wife was safe. What an awful experience to have, and the relief he must have felt when he discovered she was ok.

For further reading on the RMS Leinster, I recommend Philip Lecane’s excellent book Torpedoed! Several of Michael Joyce’s (many many) descendants will attend the commemoration on Wednesday in Dun Laoghaire.