William George Kent is, to the best of my knowledge, the only member of my extended family to die in World War I, though many others, closer to me, fought and lived. He was my first cousin three times removed, or to put it another way, he was my maternal great-grandfather, Frederick Walters’ first cousin.

William was the third child of Harriet Ure and Richard Kent. Harriet was my great-great grandmother’s sister. Though both his parents came from Dublin, William was born in Belfast on 21/09/1888.

Richard Kent was a prison warden and he worked variously in Dublin, Derry and Belfast throughout his career.  His elder siblings were Richard and Elizabeth. 3 further sisters: Mary, Margaret and Elsie did not survive childhood, and his final sibling, Jonathan, was born in 1897. The family was Church of Ireland.

By the time of the 1901 Census, the family was living at 26 Bennett St in Londonderry. In 1911, the family had moved to Abercorn Road and taken in some lodgers. However, William had already moved out and joined the army. He was in the Royal Inniskilling Fusiliers and was stationed for a time in India with the 1st Battalion before the regiment was recalled at the beginning of the war in 1914. 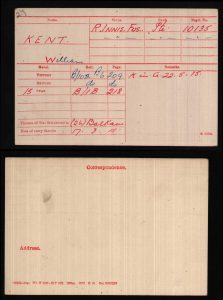 The 1st Battalion was part of the force which landed at Helles in Turkey in April 1915. Private William Kent was killed in action at Gallipoli on 22/05/1915.  He was 26 years old.

William was survived by his parents and siblings, who received a war gratuity in 1919 along with his pension.

He is buried in Twelve Copse Cemetery in Helles in Turkey. His entry in the Commonwealth War Graves Commission is here.

William is also remembered in St Columb’s Cathedral in Derry, where he sang in the choir and on the city’s Diamond War Memorial.

2022 update: I visited Derry this week and was able to photograph the plaques. These lovely poppies are hand-crocheted.

We remember him with honour.